A Seattle man is in custody after he broke into three homes in the Newport Hills area over the weekend.  One victim says the man used a flowerpot in her yard to break a glass door and enter her home, just after 1:30 pm on Saturday.  She yelled and screamed at him until he fled.  The resident then called a neighbor, who spotted the suspect and held him a gunpoint until officers arrived. 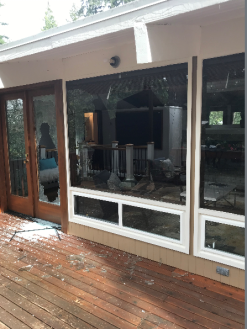 After the 38-year-old suspect was arrested, officers found the woman’s credit cards on his person. He denied any knowledge of the burglary or how the victim’s personal items got into his pocket.

During the investigation, two other residents reported the suspect had entered their homes as well.

Following the arrest, the suspect damaged the inside of the patrol car, spat on an officer’s face, and five fake $100 bills were recovered from his pockets.  He was booked into jail on charges of Burglary, Assault, Malicious Mischief, and Forgery.