Officers arrested a 23-year-old suspect in connection with an attempted occupied home burglary early Sunday morning, April 5th.  The victims stated nine family members were in the home (400 Blk 128th Ave SE) when they heard loud banging on the door, followed by gunshots.  The suspect was becoming increasingly angry because the residents wouldn’t open the front door.  When officers arrived, they found the suspect on the front porch and took him into custody. 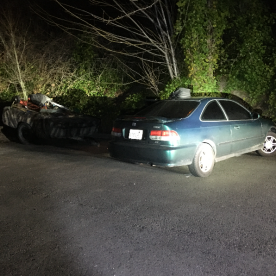 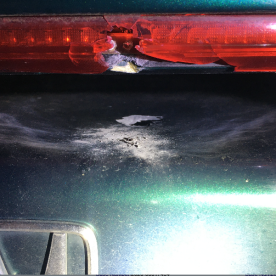 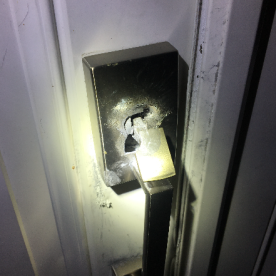 Officers recovered a 9mm handgun and ammunition on the suspect.  The suspect’s car also had multiple bullet holes in the trunk area.  And the front door handle to the residence was damaged by the gunfire. Luckily, no one in the home was injured.

The Bellevue Fire Department transported the suspect to the hospital for medical clearance, at which point the suspect threatened to kill all the officers involved in his arrest.

Later, a detective recognized the suspect on a video released by Renton police. Renton PD was looking for a gunman who shot at a convenience store clerk and shot bullet holes into his green Honda about a half-hour before the Bellevue home burglary attempt.  Detectives have confirmed it’s the same suspect in both incidents.

In Bellevue, the suspect was booked into jail on charges of Assault 1st Degree, Attempted Burglary 1st Degree, Aiming/Discharging Firearms, and Felony Harassment.